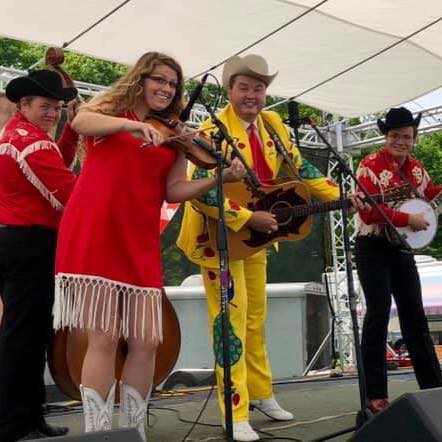 Recently, we were very fortunate to be invited into the home of Johnson County’s very own Kody Norris, to spend a few minutes talking about the legacy of G.B. Grayson. Joining us for the conversation were Kody’s fiance, Rachel Nalley and Josiah Tyree.

One of the things that struck me the most in talking with Kody is the amount of genuine respect that he has for the old time mountain musicians. He is quick to recognize and highly values the musical legacy that has been passed down to him. During the course of our interview, he passionately spoke about his appreciation of G.B. Grayson, Tom Ashely, Fred Price, and other Johnson County musicians that helped pave the way.

After spending over an hour talking Johnson County and Old Time Mountain Music around his kitchen table, Kody and his band mates took us into the parlor, where they played several G.B. Grayson tunes. Talk about awesome, they sounded AWESOME!

For those of you not familiar with The Kody Norris Show, here is some additional information from their official site:

BEHIND THE RHINESTONES: Call it retro, hillbilly, bluegrass or rockabilly, the group strives for something Kody simply calls “dern good entertainment.” Deeply rooted in North American folk music, Norris has crafted a performance that harkens back and tips a hat to the traditions created by Bill Monroe, Jimmy Martin’s showmanship, the Stanley Brothers’ harmonies, performances of the Grand Ole Opry and a bit of Vaudeville. Top notch picking is center stage, but humor and visual flash are part of the entertaining package. Always clad in colorful, tailored suits adorned with rhinestones, ties, classic hats and ornate boots, the band earns its moniker as a “show.” The brand is traditional, clean cut, acoustic and always entertaining.

The foursome is fronted by Norris on guitar and his fiddling “sweetie,” Mary Rachel Nalley, Tyler Wiseman on bass, and Josiah Tyree on banjo.The band’s album, When I Get The Money Made, was named 2017 Bluegrass Album of the Year by the National Traditional Country Music Association. The Kody Norris Show was honored with 7 nominations in the 2018 SPBGMA Awards in Nashville.

Playing 80+ dates a year, The Kody Norris Show covers the road from Canada to Mexico, only missing two states to date. They’ve been part of the University of Chicago Folk Festival and have performed at the Smithsonian and the Kennedy Center and are part of two weekly programs on the acclaimed RFD-TV’s network, The Cumberland Highlanders Show and The Bluegrass Trail.